Katy Keene is set to air the UK for the first time as the series drops on BBC iPlayer later this month – after it was revealed it had been cancelled after one series.

The Riverdale spin-off based on the series of Archie comics has already aired in America on CW, however it is yet to be shown over in the UK.

Katy Keene follows the lives of four New Yorkers each with dreams to make it big in the worlds of fashion, Broadway, music and the arts. 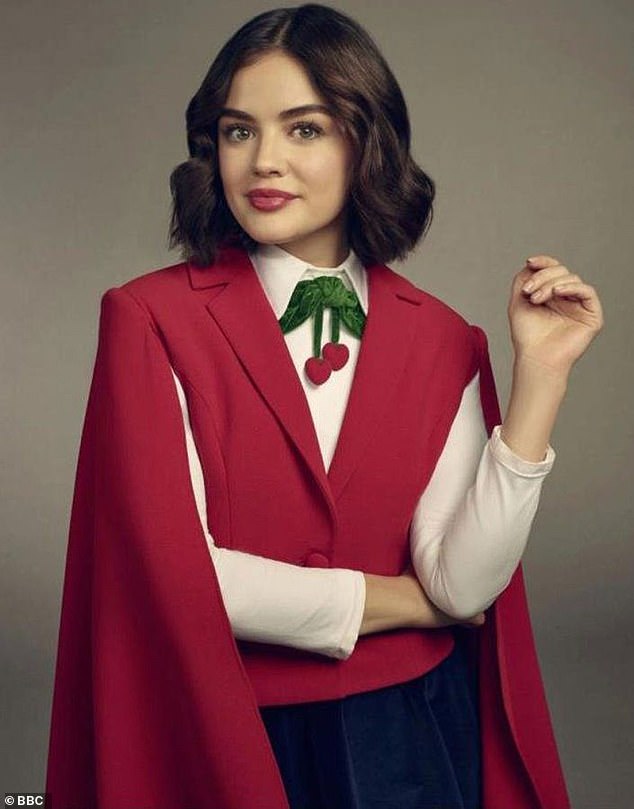 Over the pond! Katy Keene is set to air the UK for the first time as the series drops on BBC iPlayer later this month – after it was revealed it had been cancelled after one series (Lucy Hale pictured as the lead)

Music will also play a huge role in the series with stunning musical performances from the cast as they express through song and dance the fun, excitement and fear of making it big in New York City.

A tearful Lucy Hale said she was heartbroken after her comedy-drama series Katy Keene was cancelled after one season.

The actress, 31, played an aspiring New York City fashion designer in the show, which was a spin-off from teen drama Riverdale.

Network The CW announced it would not be coming back for a second season amid reports of poor viewing figures.

A devastated Hale, best known for starring in TV mystery thriller Pretty Little Liars, shared a video to Instagram in response to the news, saying she was a “blubbering mess”.

The weeping actress said: “I have struggled all day with what I wanted to say about this or if I shouldn’t say anything or… nothing felt right, I didn’t just want to post a picture or a caption because nothing would do justice to how I feel about Katy Keene or how I feel about the people involved with it.

“Truly, one of the highlights of my life. Just such a  joy from top to bottom.”

Explaining the show had not been picked up for a second season, Hale said she had experienced similar disappointments during her career but “this is a bad one”.

Katy Keene Cancelled By The CW, Looking For A Potential New Home

I’m sorry but its better than Riverdale and its still going!

The CW is not too keen on Katy Keene.

On Thursday, the network weighed in on the Riverdale spin-off as the only one of its series with its fate still outstanding. Katy Keene, which stars Lucy Hale as the titular aspiring fashion designer, has become the network’s only cancellation, after its fellow freshman series Batwoman and Nancy Drew were renewed back in January.

Warner. Bros. Television is still shopping for a potential new home. After completing its first season, Katy Keene began streaming on HBO Max, so the new WarnerMedia platform could be the most promising option for the show to continue on.

Co-created by Roberto Aguirre-Sacasa and Michael Grassi, Katy Keene seemed a sure thing for the CW before its premiere, given its ties to network hit Riverdale. It even featured former Riverdale star Ashleigh Murray reprising her role as Josie, as one of the series’ aspiring dreamers trying to make it big in New York City. Despite this and Hale’s star power, the series consistently drew modest ratings.

While Riverdale and another Archie Comics-inspired series, The Chilling Adventures of Sabrina, trade more in noir and horror tropes, Katy Keene deliberately positioned itself as more aspirational and optimistic than those shows. “Katy Keene is stepping out of the noir shadows of Riverdale and into the spotlight,” Grassi previously told EW. “We’re entering worlds like fashion, music, Broadway, drag. It’s a show about dreamers.”

“It felt to me like this could be a more romantic, optimistic, aspirational show, and Katy Keene could be the character that anchored it,” Aguirre-Sacasa added.

Now they could all use some of Katy’s optimism as the series faces an uncertain future.

EXCLUSIVE: We can report that Capone distributor Vertical Entertainment has acquired the North American and UK distribution rights to A Nice Girl Like You starring Pretty Little Liars and Katy Keene star Lucy Hale. The romantic comedy, directed by brothers Chris and Nick Riedell and based on the Ayn Carrillo-Gailey 2007 self-help book Porn-o-logy, is set for a VOD and digital release on July 17.

Pic centers around violinist Lucy Neal (Hale) who is thrown for a loop when her boyfriend accuses her of being too judgmental and inhibited when it comes to sex. In an effort to prove him wrong, Lucy creates a wild to-do list that sends her on a whirlwind journey of self-discovery, friendship and new love.

“Bringing this film to life was a dream. More love. More laughter. Bring it on,” said producer, Jina Panebianco.

Panebianco produced alongside Nicholas Bogner, and Melanie Greene and their CaliWood Pictures.

Spoiler alert: Do not read if you have not yet watched the Season 1 finale of “Katy Keene,” titled “Chapter Thirteen: Come Together.”

The Season 1 finale of “Katy Keene” left fans with a major cliffhanger: whether or not Leo Lacy (Cary Elwes in a blink-and-you’ll-miss-it cameo), is Katy’s (Lucy Hale) father, a possibility the budding fashion designer didn’t hesitate to blurt out at episode’s end.

“I love that Katy just jumps in immediately, like, ‘Yeah, yo, you’re my dad,’” Hale said on the Variety After-Show on Instagram Live.

Hale added that Elwes’s character might one of a few “Katy daddy” contenders, a scenario she said she wouldn’t mind seeing play out “Mamma Mia”-style in a future episode, given the show’s musical flair.

“One. Hundred. Percent,” said Hale, to that prospect.

Hale has lent her voice throughout Season 1, topping it off in its final episode with a rendition of Sara Bareilles’s “She Used to Be Mine” from the musical “Waitress.”

Lucy Hale: ‘I Knew My Dog Elvis In A Past Life’

Lucy Hale believes she knew her dog Elvis in a previous life because they are “entirely too connected”.

The Pretty Little Liars star adopted the Maltipoo in June 2016 and the canine has become so famous that he even has his own Instagram account. And in an “Ask Me Anything” video interview with Elle U.S., Lucy made the surprising admission that she believes she and Elvis were somehow connected in a past life.

In response to the request to complete the sentence, “In my past life I was…”, Lucy replied: “Absolutely in my dog Elvis’ life. I don’t know if I was his owner, or if he was my owner, or if we were friends. I totally believe in reincarnation and I know for a fact that I’ve known Elvis in a life before because we are just entirely too connected – he’s the best.”

The 30-year-old actress has been in lockdown with Elvis, who she considers her “emotional support dog”, during the coronavirus pandemic, and she “simply doesn’t know” what she would have done if she didn’t have her dog to keep her company during these unprecedented times.

And while she’s thinking about getting another pooch to keep Elvis company, she isn’t sure whether or not to make the leap.

“I’m thinking about possibly getting another one. But I just don’t know how I could love another dog as much as I love him. It just doesn’t seem possible,” she grinned.

Lucy Hale doesn’t care what guys take into consideration how she appears.

In her March 2020 cowl story for Cosmopolitan, the previous “Fairly Little Liars” actress, 30, known as chopping about eight inches off of her brown hair “essentially the most liberating factor” she’s ever finished, added that she’s stunned by the opinions males appear to have relating to her magnificence look.

“I couldn’t let you know the quantity of occasions when guys have been like, ‘You need to develop your hair out once more. I like lengthy hair,’” she mentioned. “I’m like, ‘I’m not chopping my f—king hair for you.’ I lower my hair for me. And I really feel nice with it this fashion.”

The actress declared that she’s proudly single — although she did swipe proper on John Mayer on a secretive movie star courting app — and is concentrated on doing and shopping for issues for herself that make her really feel good.

“I look again and I consider all of the minutes and hours I’ve wasted upset over how I appeared or one thing that was out of my management,” she mentioned. “I want I might get that point again, though it has led me to the place I’m at now.

Borrego
Elly 2021
Borrego follows a young botanist who relocates to a small desert town to study an invasive plant species. She must fight for her survival when she's kidnaped by an inexperienced drug mule after his ultralight plane crashes in the desert.
Big Gold Brick
Lily 2021
Big Gold Brick recounts the story of fledgling writer Samuel Liston and his experiences with Floyd Deveraux, the enigmatic, middle-aged father of two who enlists Samuel to write his biography. But the circumstances that lead up to this arrangement in the first place are quite astonishing-and efforts to write the biography are quickly stymied by ensuing chaos in this darkly comedic, genre-bending film.
Son Of The South
Carol Anne 2020
A grandson of a Klansman comes of age in the deep south and eventually joins the Civil Rights Movement. Based on the Bob Zellner's autobiography "The Wrong Side of Murder Creek."
The Hating Game
Lucy Hutton 2020
Resolving to achieve professional success without compromising her ethics, Lucy embarks on a ruthless game of one-upmanship against cold and efficient nemesis Joshua, a rivalry that is complicated by her growing attraction to him.